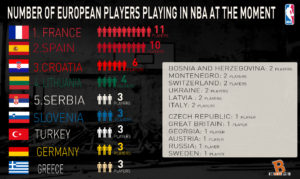 One of the best NBA guards Goran Dragic started his professional basketball career playing for KD Ilirija at age of 17 in second Slovenian league. Goran appearance on big scene happened in the 2004/05 season when he signed contact with Slovan and started playing in the Adriatic league. In his first Adriatic league season Goran had limited role and playing opportunity since he was only 18 years old. In 27 played games Goran played 8.3 minutes and had average of only 1.7 points per game. Breakthrough season for Dragic was the 2005/06 one. In that season being only 19 years old Goran averaged 15.2 points and his minutes increased radically (30.2 minutes per game). In game against Zadar, Dragic was leading Slovan to one of their13 wins in 2005/06 season. Goran scored his career high of 30 points being 19 years and 9 month old. He had perfect shooting night in  game against Zadar having 100% FG percentage (6-6 for 2 points, 2-2 for 3) and 75% from FT line (12 from 16).   Geoplin Slovan finished season on 9th place and Goran Dragic moved to Spain singing contract with  Saski Baskonia  but being loaned to Polaris World CB Murcia. After only one season playing in Spain, Goran came back in the Adriatic league, this time to  Union Olimpia. Coming back in Olimpia Goran also had opportunity to play  in the Euroleague. The 2007/08 season was also only season where Goran played in best European competition. Playing for Olimia Goran averaged 12 points in the ABA league and 9.7 in Euroleague. His career high in Adriatic league was 24 points vs Red Star Belgrade while in Euroleague he scored 22 points in game against Montepaschi Siena. Union Olimpija won title in Slovenia and in ABA league they finished season on 6th place not qualifying for the Adriatic league  F4. After the end of the  season Dragic entered the NBA draft and was selected in second round as 45 pick from San Antonio Suprs. His draft rights were traded to Phoenix Suns in exchange for Malik Hairston. He is first player who went straight from Adriatic league in the NBA. 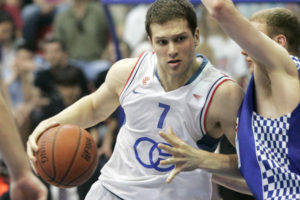 Born in Bosna & Hercegovina Bojan started his basketball career in local club Zrinjski Mostar. In the 2005, he signed a five-year deal with Real Madrid, but was loaned back to Zrinjski Mostar for the 2005/06 season. After 4 years not getting chance to play for Real Madrid Men’s team Bojan decide to part ways with Spanish club. In August 2009, Bogdanović signed a four-year deal with Cibona Zagreb where he played 2 season in a row. Playing for Cibona Bojan also participated in Adriatic league. His first ABA league season ended up with 8.1 points average but in second one Bojan was KK Cibona top scorer with 18.9 points per game. Bojan ended up being third  best scorer of the league but Cibona couldn’t repeat success from previous season when they qualified for final game vs BC Partizan. Anyhow on the end of the season Bojan is selected from Miami Heat as 31st round pick and later was traded to Brooklyn Nets. Before going to the NBA Bojan played 3 season for Turkish Fenerbahçe Ülker. 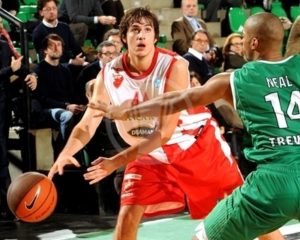 After playing one season in Austria Nemanja returned in Serbia and played two successful seasons for Red Star Belgrade. In his first season he had average of 4 points while in second he averaged 9.9 points per game. Bjelica was drafted by the Washington Wizards being  the 35th pick of the 2010 NBA draft. His draft rights were then traded to the Minnesota Timberwolves. In 2010 after being drafted Bjelica signed for Baskonia where he played for 3 seasons before he went in Fenerbahçe Ülker. Nemanja joined Minnesota Timberwolves in 2015.

Marjanovic played in Adriatic league in several accessions. His first appearance in ABA league was in 2006 when he was only 18 years old.  Marjanovic played for BC Hemofarm for 4 seasons before he transferred in CSKA Moscow. After two season playing aboard Boban again returned in ABA league this time playing for BC Radnicki from Kragujevac. In his new appearance in the Adriatic league Marjanovic played 9.3 minutes per game averaging 4.4 points. One of his  best season  was 2012/13 when  Marjanovic transferred to Mega Leks and had double-double average of 17.2 ppg and 12.3 rebounds. Back then Mega Leks didn’t played in the ABA league but after such a great season Marjanovic signed for Red Star. Serbian big guy played two season for Red Star with great success before going in the NBA. Boban Marjanovic went undrafted but still managed to sing NBA contract as second player who went directly from Adriatic league in the NBA.

Nikola Pekovic played 3 season in the Adriatic league being part of KK Partizan. After signing contract with KK Partizan in 2005 Pekovic quickly became one of the team most important players. In first ABA league season Pekovic averaged 7.3 points per game while in the next season  (2006/07) he had 8.2 points average. Pekovic last Adriatic league season was also his best one. Before transferring to Panathinaikos Pekovic had 15.4 points per game with 6.3 rebounds in 25.9 minutes on court.  That year Pekovic was named ABA league MVP. In the same year Nikola earned an All-Euroleague Second Team selection. In Euroleage Pekovic had some  impressive games. One of many was  29 points game vs FC Barcelona. He was 31st pick on NBA Draft and was selected by Minnesota Timberwolves in 2008. After spending two years in Greece Nikola joined Timberwolves in the NBA. 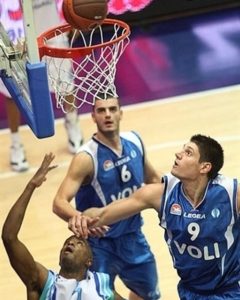 After 4 years of college career Nikola was drafted as  16th overall pick in the 2011 NBA draft by the Philadelphia 76ers. Due 2011 NBA lock out Vucevic went in KK Buducnost from Podgorica and appeared in 10 Adriatic league games.  Following the conclusion of the lockout, Nikola went back in the United States where he signed his rookie contract with the Philadelphia  76ers. During his time with KK Buducnost Nikola averaged 16.9 points per game adding 9.7 rebounds in 28.3 minutes. As mentioned before Nikola played only 10 games for KK Buducnost in ABA league but also played 4 games in Eurocup for Montenegrin team.

Detroit Pistons guard played in ABA league in two seasons for two different clubs. His first ABA league was in 2001/02 when he played for Union Olimpija and had average of 9.6 points. Season after Beno transferred to Maccabi Tel Aviv and also played in ABA league for Israeli team. Playing for Maccabi Beno averaged 10.7 points per game. 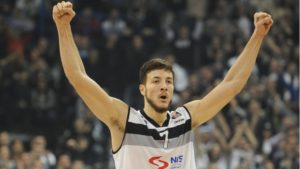 Joffrey Lauvergne French national team player started a trend of European non EX-Yugoslavian players that made a great breakthrough via Adriatic league. Lauvergne played two seasons in a row for BC Partizan. Lauvergne joined to BC Partizan on 28th of December 2012 and finished his first season with 5.2 points average. In Joffrey’s second season he became team captain and increased his playing time together with points per game (10.8 ppg). He was drafted as  55th pick  by the Memphis Grizzlies in the 2013 NBA draft, and was  traded to the Denver Nuggets. He was selected as 55th overall pick by Memphis Grizzlies and played one more years in Europe before he went in the NBA.

After two and a half seasons playing for BC Partizan Davis moved in Spanish AB league. Bertans played two years in Baskonia befroe going in the NBA. Davis was drafted as 42nd overall pick by Indiana Pacers.

Saric is one of the highest ranked player from ABA league on the NBA draft. Saric was drafted from 12th position by Philadelphia 76ers. Before he went in the NBA Saric spent two seasons in Anadolu Efes in Turkey. Saric spent 4 years in ABA league playing for KK Cibona (3 years) and KK Zagreb (1 year).

We have number of 15 players who ended up in the NBA but at some stage of their careers  played in the  Adriatic league. In near future we do expect much more ABA league players to continue their careers in the NBA. Players like Bogdan Bogdanovic, Dejan Milutinov, Luka Mitrovic and Nemanja Dangubic already got drafted but still are waiting for their NBA opportunity . Rade Zagorac and Ante Zizic are on their way to the NBA and most likely increasing  number from 15  ABA league at 17 players already next season. This season draft will most likely have players like Alpha Kaba or Jonah Bolden (not European)  coming  form the ABA league. If not before, 2018 draft might welcome guys like Vlatko Cancar, Kostja Mushidi, Borisa Simanic, Dzanan Musa or even Vanja Marinkoivc, Blaz Mesicek, Marko Arapovic or Nik Slavica? It will be very interesting to follow situation for this season draft with Ognjen Jaramaz and Marko Guduric or perhaps can they find their spot in NBA through the summer league.

Overall Adriatic league is still shoulder to shoulder with ACB and French PRO A league when it comes to numbers of players going to the NBA. This proves that ex-Yugoslavian basketball still have lot of potential and is definitely region that NBA scouts, teams and GM’s  should have an eye on.

Adriatic league players in the NBA